I’d never seen Desmond Dekker live before I photographed him on stage 13 years ago, which wasn’t really unusual, but as is usual with most good artists, the live show was so much better than watching a video.

I knew the hotel he was staying in, so spontaneously decided to pop in and introduce myself, something I’d never done before or since, but was really glad I did.

He turned out to be quite a decent man.

He asked me if I knew what sort of audience he could expect, and I told him I thought they’d be very appreciative. I could see that he was genuinely quite nervous. That surprised me.

I asked if I could take a few informal shots, which he declined, slyly asking me who I’d come to photograph. He grinned and said that I would be able to meet Desmond Dekker later, when he was performing. “Here, I’m just Mr D[acres?],” he said.

The hall was jam-packed and even the walls were sweating. I worried about my lenses steaming up, so sat backstage, letting my gear warm up until it was time for the concert. 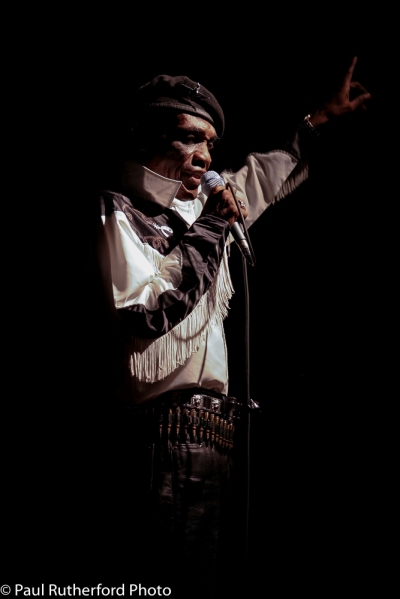 Desmond Dekker, photographed in 2004 during a live performance

When Dekker stood by the side of the stage, dressed as you see him in my image, I was reminded of Elvis Presley for a moment. He looked nervous as his band took to the stage and played a song, but as soon as he climbed up there himself, the years just seemed to slip away, as if performing was his whole reason for being here.

Needless to say, he went down a storm. The audience was enthralled, the band were excellent, and Desmond Dekker may just possibly have played the concert of his life… maybe?

But I truly don’t know for sure… I was watching the lights, trying to anticipate Dekker’s moves, and taking my time before holding my breath and taking a shot.

I could have taken the lens down to f/2.8 but didn’t. I’d usually start with f/2.8 and an ISO of 800, but to get the sort of shots I wanted, I needed to calm the light down and decided to go for f/4 and leave the ISO where it was. No flash of course.

Today, with the image stabilisation advances, both in-camera and lenses, I’d have probably tried taking these shots at around ISO 200 and definitely f4.

You can check out Desmond Dekker’s life story on Wikipedia if you like.

Prints of all images within these pages are available: contact me for more info,