Warren Todd was born with a condition called Potocki-Scaffer Syndrome [PSS], in October 1999.

PSS is the name for an extremely rare chromosome deletion: so rare, he is the only known case in the UK and one of less than a hundred worldwide. The condition causes a wide and variable range of disability amongst those diagnosed with the syndrome. Of this group, Warren may possibly be one of the most profoundly disabled.

It was known within several months of Warren’s birth that he had ‘something wrong’ with him. He never cried – ever. He didn’t move around much nor make the range of sounds that other babies do. He didn’t look you in the eye.

Genetic testing showed he had an abnormality of chromosome 11, which was finally given the name – PSS – when he was nearly eleven years old. He had been living with ‘Nanny Sue’ since he was twenty months old.

He can’t walk, talk, feed himself properly or deal with personal care. He is epileptic, doubly incontinent, developmentally delayed, autistic and has potentially painful skeletal abnormalities called exostoses. Warren may wake and need changing at the most inconvenient times of the night; or he might not sleep at all. Sometimes it feels like he wakes intentionally just to remind us he’s there, as he happily claps, shouts, sings, or just randomly makes noise at 3 a.m.!

Yet Warren understands most of what goes on around him and what is said to him, although his communication problems mean he has little control over what ‘happens’ to him. He communicates with subtle hand and finger movements for ‘yes’ and ‘no’, as well as smiles and laughter: sometimes, growls and shouts!

On occasions he uses identifiable words. He shouts for ‘Gandad’ when he wants to see me and will sometimes say ‘inner’ [dinner], ink [drink], or ahn’t [can’t], for example.

Almost as if he has a deep fear of ‘being wrong’, or making mistakes, Warren generally behaves as if he has no interest or understanding at all. Perhaps he feels it to be a ‘safe’ option? To those who don’t know him very well, he appears to be incapable of anything. But Warren does know, he does think, he does listen and engage: but rarely and only with a very few people he trusts implicitly.

Warren Todd relies on adults for all his care needs and requires twenty-four hour supervision. He will need this level of support for the rest of his life. 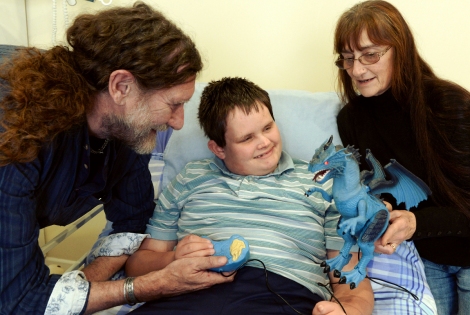 But Warren tries his best: he endures a lot, suffers a lot, yet smiles a lot. He has a very cheeky sense of humour, he tries to engage – something many people fail to recognise – and in turn can be very engaging himself.

Routines are very important to Warren. Getting him ready for the day or ready for bed must follow the correct sequence. Deviate at your peril! He knows which days he goes to school and takes time to adjust to school holidays. If he could tell us himself, we think he would probably prefer to go to school every day. He ‘does stuff’ at school; one of his favourites is swimming, and he’s often fussed over by some of the classroom assistants!

Weekends are different as, of course, they are for all children. On Saturday, Warren gets irritable if Gandad doesn’t take him to the local car boot sale, where he gets chips and has a look round at all the stalls. Sometimes he gets his chips for free, or maybe a sausage on top, from the ‘nice lady in the burger-van’ [as we call her!].

Sundays, Warren likes to just chill out. He will sit outside for hours if the weather is nice, happily watching and listening to the birds, passing trains, cows in the field over the fence, lawns being mowed or whatever is going on around him.

Without Personal Assistants [aka ‘carers’], Warren’s experience and enjoyment of life might be much less. They help ‘spread the load’, giving the three of us the space we need and give Warren a ‘friend’ who is essentially independent of the family. That, in turn, allows Warren a degree of independence: the ability to go out to his Boccia games and Gardening Club for example, without Nanny Sue and Gandad in tow. Independence like that is important for Warren’s personal development, helping to build trust and confidence in other adults.

Medical appointments, dental appointments, social services and occupational therapy, short-break, educational and financial assessments and reviews occur with an almost monotonous, even tedious, regularity. Hopefully, we have managed to get all the equipment Warren currently needs for his day-to-day life and won’t need to have to do too much ‘begging’ in the future. Because we can speak for Warren at the moment, his life can be as fulfilled as we can make it.

One day, Warren will be left alone in this world.

It is our wish, perhaps dream, that we can convince whoever holds the purse-strings that Warren ought to be allowed to remain living in his current, heavily adapted and very familiar home for the whole of his life.

Having a team of PAs working around him is the ideal, and almost certainly the only way he is ever going to have a life as happy and fulfilled as he does now. But that depends on how Warren and others like him are seen to ‘deserve’ the financial outlay by government: both local and natonal.

For Warren Todd, being placed in a residential home would almost certainly destroy him. He would shut off. Everything we work so hard to bring out in him; the pleasure he gets from what we can provide him would all be lost. Warren needs an advocate: someone who really knows him, who he trusts and knows, someone with the strength and commitment to speak on his behalf.

We need to know he has that person beside him before Sue and I take our leave and he is left all alone in a world he will never comprehend.

That really is a desperately frightening prospect.

I was asked recently by ‘Grandparents Plus’, a support group for kinship carers, to write a letter to Warren. It really was a challenge, and you can read it here, on their blog.

Warren went on his first ever holiday in June 2014. Read about it here: My First Ever Holiday – as experienced by Warren Todd.