My mother’s father was a sea captain in the Merchant Navy, as was his father before him and I was always expected to become.

When I was a youngster, my grandfather would get out of going to church by talking me to the docks where the big ships moored, sometimes three abreast along the riverside. We usually went on board one, and maybe crossing another to reach our destination. By the age of six, I’d probably seen more ships’ engine rooms than most people see in a lifetime!

I’m sure now, that Grandfather would have a sneaky tot of something with the captain or other officers who were his mates from his long life at sea, and they would tell me stories of sailing in ‘proper’ ships, where skill and an amount of daring won the end of voyage bonus as they ran with the wind around the oceans of the world. 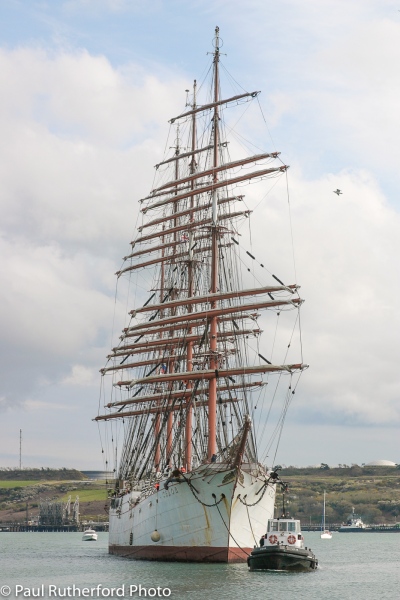 World’s largest tall-ship, the Sedov, from Russia, seen being helped into Milford Marina by a tugboat, with part of the refinery in the distance.

Those people are all gone now: those who, like my Grandfather, left home at 12 or 13 years old to join a crew as cabin boy on a clipper ship sailing out of port bound for the Far East, the West Indies, or similarly exotic locations.

These days, every time I see a tall ship, I remember my Grandfather: I smell his pipe tobacco, his cigars, the salt-cod he kept in his garage and I hear his voice telling me stories of his life at sea, of the days when sailing was just that.

And I never did go to sea…